Last month (September 2020), NVIDIA's new GPURTX 30 series Was announced.The top model RTX 3090, A 2-slot and external exhaust cooler type that is easy to use as a multi-GPU has been released, so we immediately tested it.

The hardware used for verification is as follows.The storage is not described because it is changed for each verification OS, but SATA type SSD is used.

The outline specifications of the RTX 3090 that we are verifying this time are as follows. 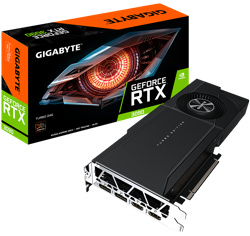 * The power consumption is 350W for the NVIDIA model of the chip maker, but this card is not listed above because there is no official notation on the card maker side.

Here is a picture of the test environment, which is equipped with two GPUs. 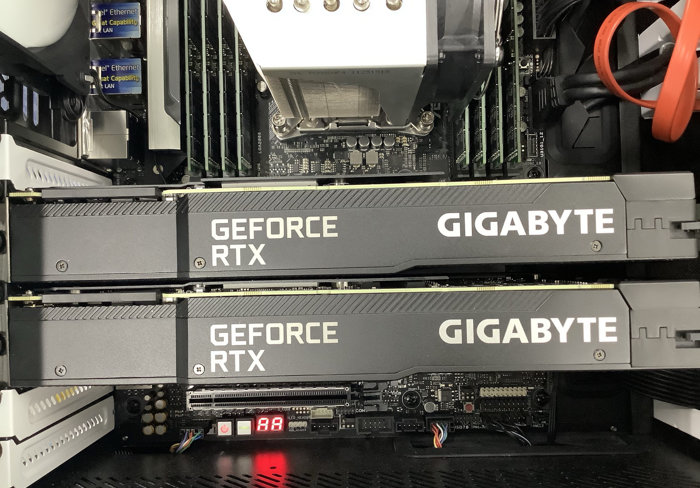 It may be difficult to understand from the photo alone, but the card size is not much different from the previous RTX 2080 Ti series.

This time, we checked the operation of Windows10 Pro 64bit / Ubuntu 18.04 / Ubuntu 20.04.We have confirmed that it works by installing the driver on each OS.

In addition, the operation verification after this will be the result of the basic Ubuntu 18.04.

The power consumption of this GPU has increased significantly compared to the previous generation.Therefore, as shown in the photo above, we conducted a verification under high load with two RTX 2s packed together.

The following GPU load test is a verification when the nbody of the CUDA Toolkit sample is operated with 2 GPU specified.

First of all, it was confirmed that the GPU temperature was about 83 ° C for the upper GPU and about 73 ° C for the lower GPU with a space near the FAN in the state of the previous photo with no gap near the cooling fan. .. You can see that the Slow down Temp on the Thrmal Sensor Information on the Setting panel is set to 95 ° C, so there is a little margin in terms of temperature, but due to the temperature difference between the top and bottom, it is still suitable for temperature control when multiple sheets are mounted. It can be seen that caution is required.

In addition, the thing that measured the temperature near the GPU exhaust port on the outside of the case under the above load condition is as follows. 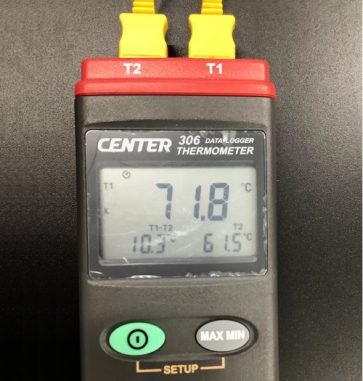 Also, regarding power consumption, in the above two-sheet load measurement (measurement at the outlet), about 2W is used even when there is almost no load on the CPU, and at present it is in a 860V / 100A environment. It can be said that the four-sheet configuration is a difficult situation.

At the time of this verification (October 2020), it was still difficult to use the stable binary.

However, I was able to confirm the GPU operation with Nightly Build, so I think that it will be supported in the future.

We also conducted an operation test with 3090 RTX 4 cards. 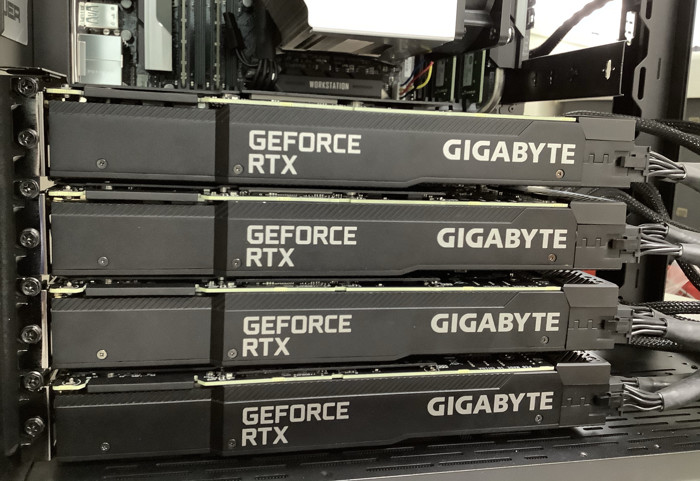 We have also confirmed the operation of the 4 GPU configuration.The temperature surface that I was worried about seemed to be able to cope with it from this verification (hereinafter image).

If you are interested in RTX 3090 4GPU configuration, please come and visit us for research and industrial PC manufacturing and sales service "TegusisPlease contact us.

We would like to inform you of a problem with the BIOS version of the ASUS TUF X299 MARK 2 configuration. Problems that occurred ASUS TUF […see next]

We would like to introduce one of the most common cases of boot failures from customers using Ubuntu. Bug occurred Ubuntu 18.04, start the system […see next]