In the previous articles, we verified the performance of GPGPU on Windows Subsystem for Linux 2 (WSL2), but in this final installment, we will verify how to use WSL2 more practically. ..

Installation Guide for Windows Subsystem for Linux for Windows 10
https://docs.microsoft.com/ja-jp/windows/wsl/install-win10#step-2–check-requirements-for-running-wsl-2

When WSL2 was officially released, it was supported by Windows 10 version 2004 or later, but now it is backported and WSL1903 can be used if it is version 2 or later.

About using GPGPU on WSL2

The use of GPGPU on WSL2 is expected to be officially supported in the next release of Windows 10 (development code name: 21H1) or later. 21H1 is available on beta channel as of May 2021 and is a Windows Update "seeker" experienceYou can download "Version 19043.844" through. * You can check the latest Windows updates and features on the beta channel.

Of course, there are advantages to using GPGPU directly (not strictly directly) in the Linux environment on WSL2, but using GPGPU has always been possible to run on Windows environment. For those interested in GPGPU, one of the strong motivations for choosing Linux has been Docker I think that it is a response to.

There has been a Docker implementation for Windows for a long time, but due to the development process, information is distributed in many directions and it was difficult to introduce it.The situation changed with the advent of WSL2 under these circumstances.

WSL2-based container startup is supported, Docker installation on Windows has become extremely smooth, and Docker containers can be operated and managed from the familiar Windows environment.Also, although it is only experimental support, GPU support has been added in the latest version, and it may be said that the biggest advantage is that GPGPU can be executed from the Docker container.

In this section, we will briefly explain the installation of Docker Desktop for Windows, which is positioned as the Windows version of Docker (* It is assumed that the environment that can execute WSL2 GPU has already been built).

No particularly difficult settings are required to install Docker Desktop for Windows.The execution environment of the Docker container is built by executing the installer obtained from the official website and proceeding step by step.If WSL2 is enabled at this time, the WSL2-based container execution environment will also be automatically enabled (you can enable / disable it in the dialog during installation).

Once the installation is complete, you can run the Docker container from Windows commands.If WSL2 support is enabled at this time, the distribution set as the default on the WSL2 side and the Docker execution environment will be integrated, and Docker can be operated from the Linux distribution on WSL2.

We started the Docker container published by NVIDIA and confirmed that NBody (N-body simulation) provided as a sample program * of NVIDIA CUDA Toolkit works as in Part 2. 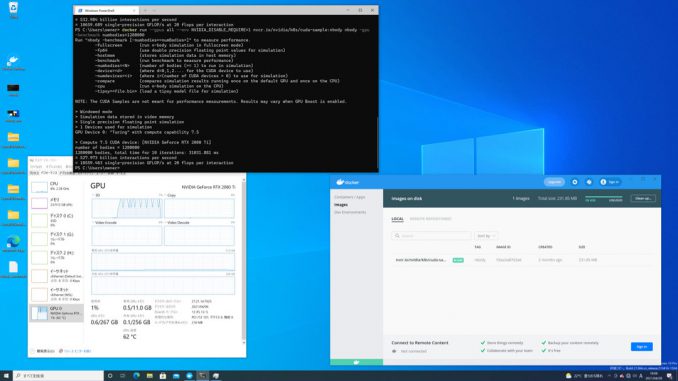 As mentioned above, GPU support in Docker for Windows is currently in the experimental stage.Even in the verification test conducted by our company, there were cases where it did not work if the procedure for publishing the official website was used.It is expected that such an event will be resolved by future development, but please be aware that you are responsible for the trial.

For setup of CUDA Toolkit and execution of sample program,Here (first article) Please refer to.

In Part 3, I explained the outline of Windows Subsystem for Linux 2 (WSL2).Even in cases where two computer OS environments had to be prepared up to now, it has become realistic to process seamlessly and efficiently by using WSL2.

GPU support for WSL2 is still under development.It seems that GPU support will finally be released to the general public as the functions become more stable and expand in the future.As a preliminary step, we hope that it will be helpful to you as a brief report on the current situation.

■ This article was posted on March 2016, 3, so the information content may be out of date. Two types of machines of 25 million yen class for budget application at the request of customers […see next]

Example of WS for deep learning with 4 TITAN V

■ This is an article posted on February 2018, 2, so the information may be out of date.Deep learning WS – 21 TITAN Xp installed […see next]

■ This is an article posted on February 2017, 2, so the content of the information may be out of date.From the customer, CUDA program development and operation using Tesla P6 […see next]